Trees around the world are dying, and they’re going fast. Can we figure out how to remedy this before it’s too late?

Trees on a global scale are being threatened and are dying from drought, disease, insects, and fire as average worldwide temperatures are on the rise. Individual action to plant and protect trees can and should be taken.

fasttreeremovalatlanta.com collected information demonstrating how global warming and climate change have adversely affected trees all over the world, including screwbean mesquite trees, ancient baobab trees, dying forests in California, and the plight of the pines in Canada’s Jasper national forest.

Tree Threats Due to Global Warming and Climate Change

As global warming leads to climate change, trees are forced to adapt or die. While many tree species are able to accommodate subtle temperature changes, there are those that are unable to cope with the environmental changes. Read here about climate change and the future of deciduous trees.

Warmer temperatures translate to a longer growing season. This produces larger trees with less wood density and a lower capacity to absorb and store carbon dioxide.

As trees are responsible for removing more than 100 billion tons of carbon dioxide from the global atmosphere, a decline in their capacity is noteworthy and somewhat alarming. For more on the planet’s carbon cycle visit globecarboncycle.unh.edu/CarbonPoolsFluxes.shtml

With higher temperatures (even by 1 or 2 degrees), droughts are becoming more frequent and widespread, potentially leading to:

Carbon Starvation – During a period of drought, trees will go into a state of conservation where they all but cease carbon dioxide absorption, thus dramatically reducing photosynthesis and the production of nutrients for the tree.

While many trees species have evolved to withstand drought, their decline and eventual death are hastened as periods of drought become more frequent and lengthy.

Hydraulic Failure – During periods of prolonged or severe drought, the lack of water also known as hydraulic failure can quickly debilitate and kill trees.

As a beetle bores into the bark of a pine tree, it is met with resin, the tree’s primary defense mechanism. During periods of drought, the resin flow from pine trees is reduced, lowering the tree’s capability to repel the beetle’s attack.

Weather acts as another of the tree’s defense mechanisms against bark beetles. To kill a beetle brood, winter temperatures must remain below freezing for at least a week, and even this depends on the species of beetle.

To illustrate the warming tendencies across the continental United States, look no further than the USDA Hardiness Zone Map. The image below represents temperature increases between 1990 and 2015, subsequently causing a shift in the borders and sizes of the hardiness zones.

Some of these changes are significant enough to alter species selections for landscapes and gardens, more notably in the southern states. If these changes continue over the coming decades, plants and tree species planted as little as 30 years ago may succumb to their changed environment.

Found in western Texas, New Mexico, Arizona, Utah, California, southern Nevada, and in northern Mexico, the screwbean mesquite tree is a well-adapted species for desert climates. Yet, this tree species is rapidly dying off.

While the reasons for the decimation of the screwbean mesquite are still eluding researchers, two strong candidates are emerging from the theories:

Temperature Increases – While desert vegetation is uniquely adapted to withstand high temperatures and sparse rainfall, it is the increase in overnight temperatures that may be causing the decline and death of this species.

Pathogens – In recent studies of dead screwbean mesquites, an unknown pathogen has been discovered in several of the specimens. Whether this pathogen played a part in the demise of the trees or was an effect of what caused their death is still undetermined. To read more about the plight of the screwbean mesquite visit blog.nature.org/science/2018/10/09/the-mystery-of-the-dying-mesquites/

African baobab trees are long-lived, with some having thrived for over 2,000 years. That is, until recently. According to a recent study of the eldest of the species, they have all begun to decline or die.

Most striking is that baobab trees that have persisted for so long are now dying one after another, indicating a dramatic change in their ecosystem.

While more research is needed for a conclusive determination, the trees are currently under pressure by increasing temperatures and drought. All information thus far points towards climate change as the culprit. Read more here nature.com/articles/s41477-018-0170-5.epdf

The effects of rising temperatures, infestations, and drought on forests are abundantly clear in California’s forests. In mid-2016, aerial surveys documented that nearly 28 million trees had died in the California forest landscape.

With a landscape already prone to wildfires, California in recent years has seen its most destructive fires leave paths of devastation through communities and entire cities.

Fueled by dead and dying trees, these fires are fast-moving, more intense, and deadly reminders of the effects the climate is having on trees. For more wildfire information visit insurancepublicadjustersofgeorgia.com/wildfire-property-insurance-claim/

For further reading on the death of trees in California visit http://www.sacbee.com/news/state/california/water-and-drought/article75411182.html

Trees Changing, in Decline, and Dying Around the World

As average temperatures rise around the world, invasive diseases, pests, and drought are taking their toll on the global tree population.

In Europe, studies have revealed that warmer temperatures have created a longer growing season, producing larger, but weaker trees.

Canadian forests are being decimated by mountain pine beetles. As temperatures rise, the beetles are able to survive and successfully attack in higher altitudes. Jasper National Park in the Canadian Rockies is a perfect example where nearly half of the park’s trees have been affected and are either in decline or dead.

Tree diseases are also on the rise. In the recent past, Dutch elm disease and hemlock woolly adelgid caused catastrophic tree loss in eastern forests.

In 2010, it was found that Hawaii’s ohi’a trees were infected and dying from what was called ohi’a death disease. By 2016, nearly 50,000 acres on the big island’s native forest were found to be infected with the disease.

Currently, Beech leaf disease is posing severe threats by rapidly spreading to Beech trees in all stages, including saplings, mature trees, and those that are centuries old in the northeastern United States and Canada.

Trees are being negatively impacted on a global scale by rising temperatures. Without a solution in thecoming decades, our forests may all be at risk of dying.

In this article, you discovered how the world’s tree population is struggling with rising global temperatures, drought, aggressive diseases, insect infestations, and wildfire. You also found out that screwbean mesquite trees, African baobab trees, and North American pines are under incredible environmental stress.

It may seem that on an individual level we are helpless to halt or reverse these climatic changes. However, we can plant trees and shrubs in their correct hardiness zones, take measures to control tree pests and infestations, and provide ample water for your trees.

The original post Why Are Trees Dying All Over the World? appeared first on http://www.fasttreeremovalatlanta.com 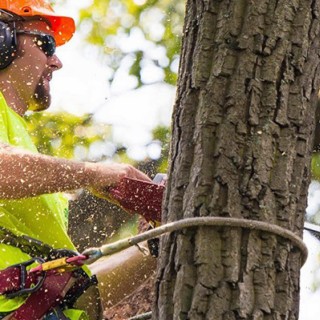